In 1853, an annual meeting was held at the Beaver Dam Church.  At the close of the meeting, with all matters attended to, it was noted that the church treasury had a surplus of $100.00.  This matter was disposed of in a most expeditious manner, for the assembly agreed to use this money towards erecting a new church at Rocky Ridge.

The new church at Rocky Ridge was built in 1853 and dedicated on Christmas Day.  The Dedicatory Sermon was preached by Elder D.P. Sayler.

On December 3, 1855, the Monocacy Church was organized (from the Beaver Dam Congregation) with Elder D.P. Sayler in charge, and Daniel Boyer as the helper minister.  In 1856, the church building was extended 25 feet to the west, with the new part containing a basement.

On August 3, 1856, Peter Fogle became the first recorded baptism in the new congregation.

Sermons by Elder D.P. Sayler on the subject of triune immersion baptism in the Union Stone Church in Thurmont (now Weller's) caused serious objections by the United Brethren.  The Brethren decided to acquire the old Log school house located about a half block south from the Union Church on the west side of Altamount Avenue where meetings began on June 1, 1883.

In 1898, the Monocacy Congregation included the home church at Rocky Ridge, church homes in Thurmont, Detour, Fountain Dale, Mountain Dale, the Leased School House at Oak Hill, and a preaching point at Deerfield. 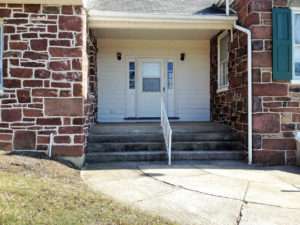 Few changes have been made to the church structure in recent years.  The building looks like it did back in the 1860's except for a Sunday School addition that was added in 1968.  There are some modern conveniences and worshippers no longer stay overnight as they did in the horse and buggy days.  The interior is still "meeting house" style.  The Rocky Ridge Congregation members stick to the traditions of the early Brethren.  Prayer coverings are worn, and the tradition Love feast is observed twice annually.

The Congregation did purchase some additional property in 1963.  the 1 1/4 acre parcel was purchased for $400.00 and the receipt for the money came to the church in an envelope bearing an airmail stamp containing a likeness of the church. Apparently no one in the congregation could remember the event wherein the stamp was issued, but it was on the occasion of National Air Mail week May 15-21, 1938.

The place of Brethren worship is called for good reason:  "The Friendly Little Church at the Ridge".